HIKING ACROSS THE ARCTIC TUNDRA ONE RECENT YEAR, I happened upon an unusual array of rocks, unlike anything I’d seen in more than three decades of exploring Alaska’s diverse wildlands. Upon discovering the piled stones, two thoughts ashed through my mind. Who would build rock walls deep in the Brooks Range wilderness, many miles from any settlement? And why?

I knew that during their nomadic days, the region’s Nunamiut Eskimos had in places built “stone guards,” called inuksuk, along caribou migration routes. Intended to mimic humans, the stone gures helped the Nunamiut steer caribou toward areas where the animals could be more easily harvested.

But these rocky forms were totally different. Built along one edge of a wide valley bottom in the central Brooks Range, they had been shaped into walls, not widely spaced cairns. And those walls were far too low—from a few inches to a couple of feet high—to act as any sort of enclosure or other barrier to the Arctic wildlife humans might hunt. What other purpose might they serve?

Though their shape and distribution strongly suggested some sort of intentional design and artistry, I soon decided these had to be natural features. That led to a new question: How had they been made?

The more I studied the rock formations, the more amazing—and puzzling—they seemed. Some were crudely linear in shape and brought to mind New England’s famed (and long-lasting) stone walls, constructed by farmers in the 1700s and 1800s to mark the boundaries of their land. Many of them still crisscrossed the Connecticut woods where I played as a boy.

Other piles stretched in large, sweeping arcs and, here and there, they formed complete circles, some only a few feet across and others many yards wide.

As I walked through the remarkable network of piled rocks, it became clear that these natural walls stretched across hundreds of yards. Wondering how they would appear from afar, I ascended a nearby hill. Seen from above, a number were linked in a way that resembled enormous script, as if some ancient, gigantic being had left a message on the tundra flats, indecipherable to humans, both beautiful and eerie. 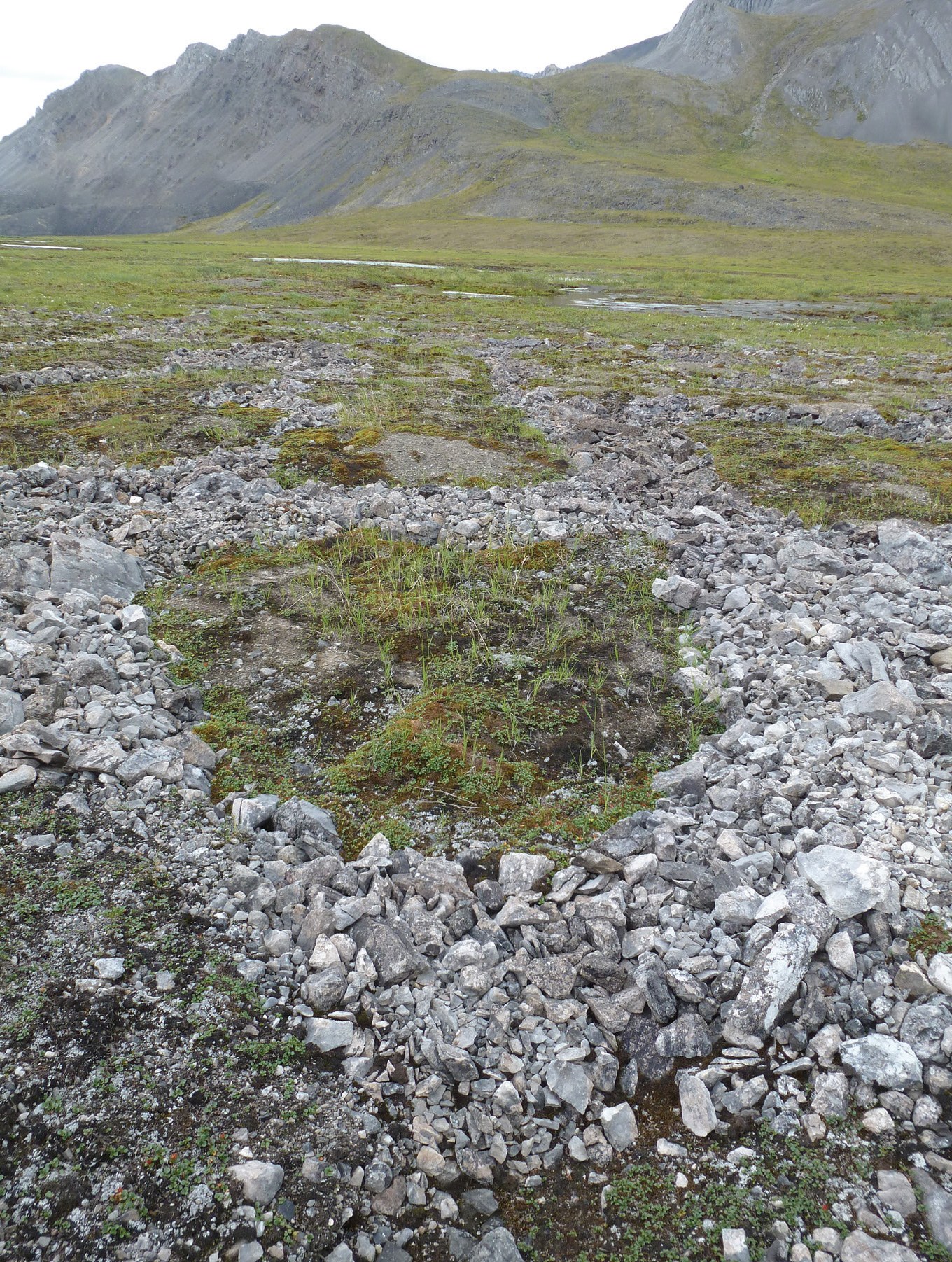 The stones that formed these walls were white to dark gray in color. Most were “limy” rocks—limestone and marble—that had once been part of the layered bedrock that formed long ago, far below the Earth’s surface, and which later had been uplifted into the great towering spires that soared along the nameless valley’s perimeter.

Individual pieces ranged from pea-sized gravel to boulders larger than my daypack. Adding to the mystery of their presence, the rocks were in places remarkably well sorted, again suggesting intention, forethought.

at sense of mystery—fed, perhaps, by memories of Connecticut’s human-made stone walls, which in my boyhood seemed to hold their own secrets—prompted me to learn more about the origins of these fantastically shaped natural piles of rock. My quest led to scientist and author E.C. Pielou’s comprehensive book, A Naturalist’s Guide to the Arctic.

In a section on “patterned ground,” I found drawings that closely matched what I observed in the Brooks Range. And I learned that the curious rock formations that appeared so mysterious to me are well known to scientists who study Arctic landforms. They are called “stone stripes” and “sorted circles.”

Like several other forms of patterned ground that occur in Arctic regions—for instance, tundra polygons, pingos, and tundra hummocks—the natural stone walls I found are caused by alternating periods of freezing and thawing. They tend to occur where tundra vegetation is sparse or absent and the ground is flat or sloping at a very slight angle; the former favors circles, the latter (influenced by slow downhill creep) tends to create the more linear stripes.

As Pielou astutely observes, such formations “illustrate, convincingly, that the absence of [plant] life does not imply absence of activity.” What appears to be “lifeless” ground made from clay, sand, pebbles, and larger rocks can move about, its activity spurred by the sun—or more accurately put, the combination of its periodic presence and absence.

When the sun is heating the landscape, rocks warm and ice melts. When it’s absent, the rocks cool and water freezes. Each freeze-thaw cycle may cause only miniscule changes in the ground—including the sorting of particles by size. But as the cycles are repeated again and again over long periods of time, Pielou explains, those tiny shifts “accumulate to produce some extraordinary patterns.”

I like that: here’s a scientist who appreciates that the end result of this natural, incremental, and largely hidden process is something “extraordinary.” I would add that the process itself also seems remarkable. And the resulting stone stripes and sorted circles are a beautiful example of what might be called nature’s own “intelligent design.”

Anchorage nature writer Bill Sherwonit is the author of more than a dozen books about Alaska, including Changing Paths: Travels and Meditations in Alaska’s Arctic Wilderness and Animal Stories: Encounters with Alaska’s Wildlife.

We Want Your Feedback!

Tell us what you want to read about in Alaska magazine. The survey should take five minutes or less.