ALASKA IS A WILD AND REMOTE PLACE, and it occurs to me while flying far out over the Bering Sea that few places, even in Alaska, are as wild and remote as my destination: the Pribilof Islands. Located 300 miles off the coast, the islands of St. George and St. Paul, are home to more than 240 different species of birds and are best known for seabird colonies with two million birds, principally least auklets, murres, and fulmars breeding on the cliff faces.  The islands support the greatest number of nesting alcids and seabirds in Alaska. Sixteen different species of alcids have been recorded in the Pribilofs.

This is a birding trip of a lifetime, one I have dreamed of for many years. Ornithologists rate the Pribilofs, and especially St. George, as among the world’s premier birding sites, sometimes referring to the islands as the “Galapagos of the North.”

The Pribilof Islands were discovered in 1786 by Russian fur traders. In 1788 the Russian American Company enslaved and relocated Aleuts from Siberia, Atka, and Unalaska to the Pribilofs to hunt fur seals.

Today, with approximately 600 individuals, the Pribilof Islands represents the largest Aleut population in the world. Virtually all land ownership is by Native Aleut village organizations. On St. Paul it is Tanadgusix and on St. George is Tanaq. The islands are now considered part of the Alaska Maritime National Wildlife Refuge.

Windy, cold, and shrouded in fog for most of the summer the islands are an unlikely tourist destination, yet tourism is a thriving business, albeit most are either serious birders or wildlife photographers. Upwards of 250 wildlife enthusiasts visit each spring and summer, primarily to St. Paul. St. George is actually a better island for birding, with as much as 90% of the breeding seabirds in the Pribilofs on St. George, but the lack of a hotel or restaurant, and infrequent flights on and off the island make visiting St. George problematic.

Even on the more frequently visited island of St. Paul, accommodations are spartan. There is only one place to stay on the island, the new King Eider Hotel, which is located in a warehouse type of building at the end of the island’s runway. Clean and functional, the hotel has 120 double rooms and shared bathroom facilities.

There is also only one place to eat: the Trident Seafoods cafeteria, where you’ll dine along with all of the workers of the processing plant. In season, the plant processes halibut, as well as the more lucrative fisheries for snow crab. But one does not visit St. Paul for luxurious accommodations or fine dining—you go there for the wildlife. 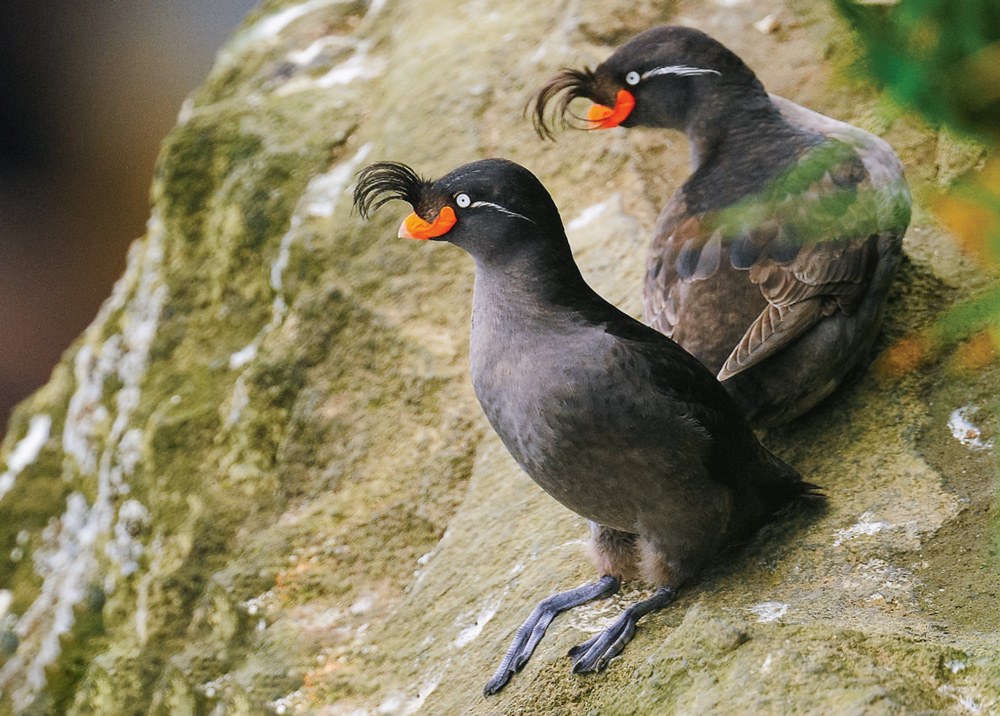 There are only four common breeding songbirds: snow buntings, Lapland longspur, long-billed winter wren, and gray-crowned rosy finch. Rounding out species of particular interest to me include the McKay’s bunting, the only endemic Alaskan passerine, and various Asian vagrants.

Birding is not the only wildlife attraction in the Pribilof Islands. Even by Alaskan standards the scenery is breathtaking, with some of the best wildlife viewing in Alaska.

During the summer months the islands are home to 800,000 breeding northern fur seals. The commercial harvest of fur seals continued from the time the Russians discovered the islands up until 1985. Today only a limited subsistence hunt by the local Aleuts is allowed.

The islands are also home to a very healthy population of the blue morph arctic fox, a sub-species that is endemic to St. Paul. The slate-blue coloration is due to a recessive gene. This handsome fox is often observed around the many breeding bird colonies, looking for an opportune meal.

The best time for birds is late spring, mid-May to mid-June, but a visit any time during the warmer months will be memorable. Come prepared for cold, rain, and heavy fog. Waterproof boots are a must to get off the roads and wander the fields, often with wet, knee-high grass. It is also advisable to allow extra days in Anchorage prior to departing for the Pribilofs since flights are often canceled due to heavy fog on

From Kodiak to Space