Friends helping friends, from the shop to the field

Sarah Juetten pulled a heavy trailer loaded with supplies on the bike ride into camp. Enthusiastic to be out of Anchorage, she had been working construction without a break since April, so a week-long hunt with friends in September 2015 for caribou off Denali Highway would be like a week in utopia.

Six years earlier, she had moved from Minnesota to Alaska and soon heard about Anchorage’s Off the Chain bike collective, a nonprofit and all-volunteer shop where anyone can learn bike repair and gain access to tools and parts. She got involved and spent time with other volunteers both inside and outside the shop.

“Really, those relationships that I established there are the friendships that are most important to me now,” she says.

Though Juetten had limited hunting experience, she felt comfortable joining her friends from the collective for a week of hunting and foraging.

In 2009, the Alaska Board of Game established community subsistence-hunt permits for the Ahtna Athabascans of the Copper River Basin. The permits were designed to meet the subsistence needs of the Ahtna people and allow them to practice traditional hunting methods, in which designated hunters harvested meat for the whole community. Following a lawsuit and superior court ruling in 2010, the Board of Game opened that hunt to all Alaskan residents.

Groups that hunt with these permits must follow rules that are based on traditional hunts: Bag limits are filled by designated hunters and shared by the group, and permit holders must be committed to practicing traditional uses for moose or caribou, passing on hunting skills and values, sharing the meat with others, using as much of the animals as possible, and engaging in other subsistence activities such as foraging for edible plants. 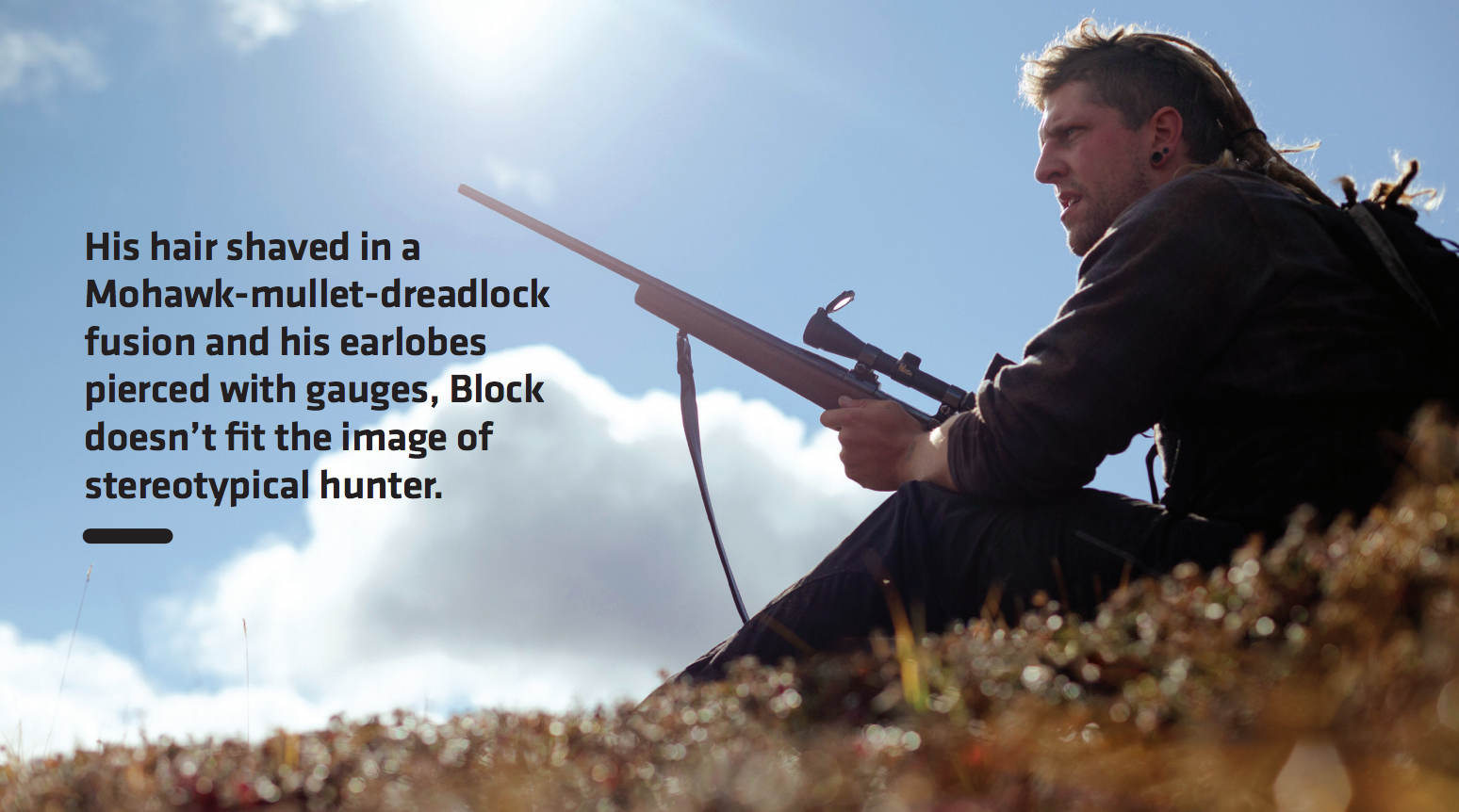 Though some controversy has surrounded abuse of the permits, the Bike Collective’s hunt coordinator, Birch Block, stresses the importance of respecting those rules. His hair shaved in a Mohawk-mullet-dreadlock fusion and earlobes pierced with gauges, Block doesn’t fit the image of stereotypical hunter, but he first stalked a caribou with gun in hand at just 10 years old. Growing up included regular hunting trips with his dad and a diet that he describes as “highly subsidized” by wild game, a luxury that didn’t sink in until he was older.

“I really appreciate it as an adult, because I enjoy the good-quality food that I get from the ethical practices of hunting,” Block says. “And it feels good to share that.”

For the past three years, Block organized the community hunt for people mostly associated through Off the Chain. Instead of competing with crowds of hunters riding ATVs, Block decided to lead the group into a nonmotorized hunting district north of the Denali Highway. So the group, of course, arrived on bike.

“The hardest part is probably just biking in,” Block says.

The ride into camp is eight miles up a steep, gravel mining road. Mostly uphill. At camp, not everyone hunts. Instead, some participants cook, gather berries, fish for grayling, shoot ptarmigan, or handle other tasks to help the community. Block has worked from the start to keep the hunt open to all people regardless of their background or hunting experience.

“That’s kind of an emphasis, to get people who don’t have the social privilege to be in that kind of a hunting

Block has developed a system of sharing that allocates meat based on contribution: hunting earns a share, field dressing earns a share, hauling supplies by bike earns a share, and food processing earns a share. After all the caribou is harvested and processed, Block divvies up the pounds by the number of shares and gives everyone what they earned. So far, he says the system has prevented complaints. Last year, the group also donated meat to the Ahtna people as a thank-you for hunting on their ancestral land.

For her part, Juetten hunted and didn’t waste any time contributing. The first day at camp, she and a friend hiked out to get a lay of the land. The two eventually split up before Juetten chanced upon a caribou close enough for her to feel comfortable taking a shot.

Juetten, who had never shot an animal, looked down the scope of her .30-06 and felt the intensity of what it meant to take a life. Her bullet went through the caribou’s heart, killing the creature quickly—to her relief.

She started skinning the caribou alone until she was able to call her friend back, and the two of them worked together to field-dress the animal. Dark had arrived by the time they hiked back to camp, and everyone else could see their headlamps bobbing. Soon, a relief party biked to the two ladies, hauling trailers and packing cold beers. “That’s really valuable to me,” Juetten says. “To share that experience and to share what we worked collectively together to get.”

Alexander Deedy is the assistant editor and digital content manager for Alaska magazine.

A Good All-Around Pair of Binoculars

Caribou Antlers: A Means of Seduction